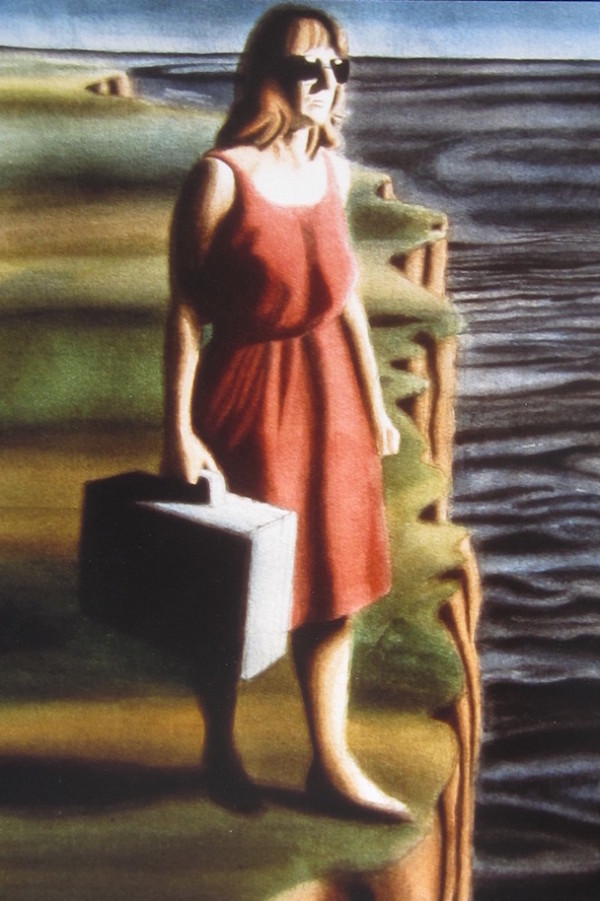 This is the first image in Robert’s painting cycle detailing an obsessive love triangle. The heroine of the story, a 23-year-old Canadian, arrives in Monterey and marvels at the cliffs overlooking the ocean. She feels these cliffs are a suitable symbol of her own situation. (She’s travelled thousands of miles to be with a famous married man who she’s never actually met in person.) It’s the beginning of a journey that promises excitement but also emotional danger. As the philosopher Friedrich Nietzsche warned, “when you gaze long into an abyss the abyss also gazes into you.” (Beyond Good and Evil)

The sunglasses function partly as a disguise which allows the assumption of a new identity. The story is set in California, though Robert reimagines it in a hybrid Golden State/ Nova Scotian landscape. Elizabeth Smart describes cottage country outside Monterey: “Between the canyons the hills slide steep and cropped to the cliffs that isolate the Pacific. They change from gold to silver, grow purple and massive from a distance, and disintegrate downhill in an avalanche of sand.”