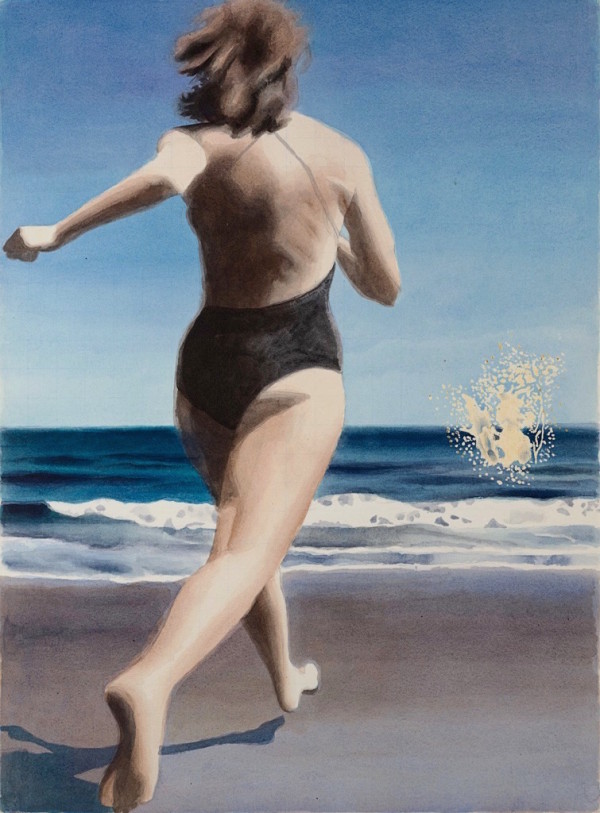 In his summary of Elizabeth Smart’s novel, Robert notes that Part 3 contains a “lyrical outpouring of happiness, much water imagery.” In Plunge, Robert captures the freedom and joyous abandon of running near the ocean. In the distance can be seen the explosive trace of a splash made by an unseen body. To “take the plunge” involves a sudden immersion into a new experience. This decisive immersion, bravely jumping in without hesitation or over-thinking, is a metaphor for both the act of falling in love and the act of creating an artwork.

Robert’s painting was partly inspired by David Hockney’s Pop Art painting, A Bigger Splash, 1967. Robert has transposed Hockney’s momentary disruption of water in a calm Californian swimming pool to a beach-side setting in Nova Scotia. For many Canadian artists, one of the challenges of Pop Art was how to apply its ideas and techniques to a landscape tradition. Hockney’s Bigger Splash suggests one answer. Explosions were central to the 1960s aesthetic of bringing a cartoon-intensification into people’s homes and public spaces. A Bigger Splash also has a haunting quality. No humans are in sight, but the splash provides evidence of recent human activity, as if a person were present and absent at the same time. This sense of being simultaneously present and absent is a key feature of Magic Realism, and it’s a poignant mixed feeling that Robert explores repeatedly in his “Accident” and “Illness and Healing” series. The painting Plunge marks an important halfway point between the Pop Art of Robert’s art school days and the Magic Realism of his later work.