A Seal Upon Thine Heart 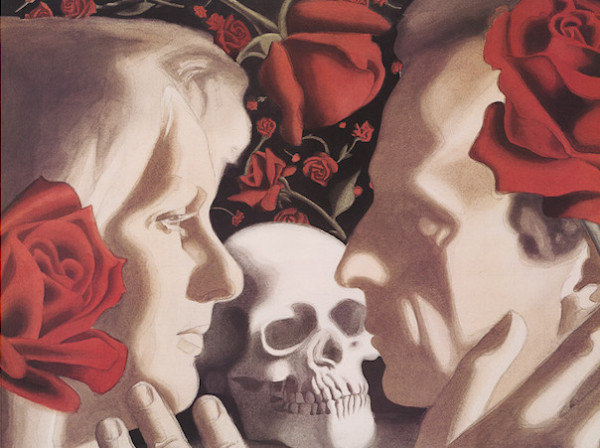 This image looks more like the cover of a Gabriel Garcia Marquez novel, detailing the comic labyrinth of human passion, than an example of the deadpan school of Canadian social realism. The image does have a literary connection, one of a series of images based on Elizabeth Smart’s novel, By Grand Central Station I Sat Down and Wept, a little-known classic of Canadian literature. Two lovers and a shower of roses, frozen in mid-air, establish a fantastic and festive atmosphere that is tempered by the presence of a grinning skull.

When a skull is included in a scene in a painting, it is called a memento mori, a reflection on mortality meant as a caution against vanity and the pursuit of goods and titles that will disappear over time. The title of the painting comes from the Bible: “Set me as a seal upon thine heart, as a seal upon thine arm: for love is as strong as death.” (Song of Solomon 8:6) For Christian scholars, this passage refers to a commitment to Jesus; however the language is beautiful and open to different meanings. Robert interpreted this passage as an example of his favorite theme, that of “oppositions” or duality. In this case love and death.