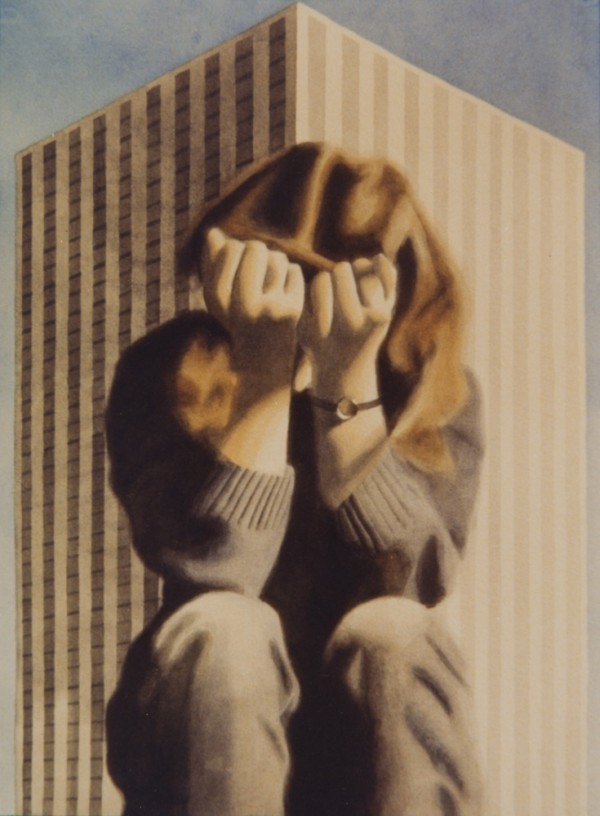 This forlorn giantess is reminiscent of Goya’s sad giant at the end of time, cut off from the last remnants of humanity. Robert loved symmetry, but often used it in an ironic manner, as here, the cool geometry of the building and composition contrasting with a distraught display of emotion.

The image is part of Robert’s lovers series based loosely on the novel, By Grand Central Station I Sat Down and Wept. Robert refers to this title without directly illustrating it, substituting a modernist building in place of New York’s best known train station. The title of Elizabeth Smart’s book refers to the Bible (psalm 137: “By the waters of Babylon we lay down and wept”). The Jewish exile to Babylon has been updated to a story of a Canadian stranded in America.

Why does Robert call his painting, Pagan Martyr? The forlorn heroine is not a martyr of the church; she has not sacrificed herself for God or religion. Instead, she has sacrificed herself for love. In the novel, the heroine gives up contact with her parents and friends, loses touch with her country and in the end gives up her career as a creative writer, all to pursue an affair with a man who may be unworthy of her. In the author’s words, he’s a “cad,” who doesn’t fully return her love. This pattern of self-destructive love belongs to a genre of literature, expressed most fully in Baudelaire’s Flowers of Evil, but is told from a woman’s point of view. An interesting element of this genre is that no lesson is learned, no reconciliation reached, as the pattern repeats in an endless cycle. Pursuit, passion, disappointment, pursuit.

In Robert’s later Illness and Healing series, a martyr theme emerges in many images. Patients view themselves as victims of various forms of cancer that upset their lives in every way. The martyrdom of patients, like the martyrdom of lovers, may reside in accepting a difficult fate without fully understanding it.