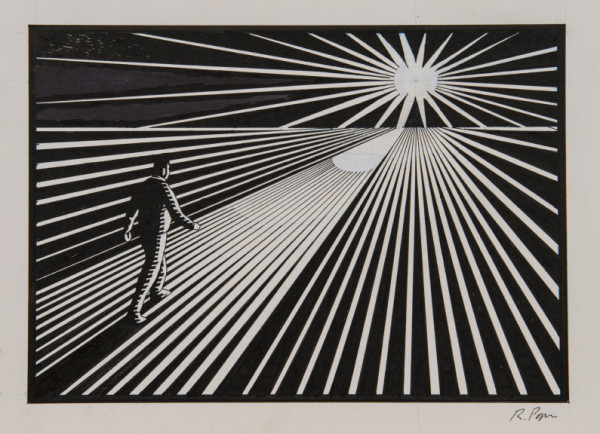 This Ezekiel-like vision by way of Bob Dylan is one of a number of pen and ink studies exploring the idea of a stranded man looking for help. In earlier versions of the image, Robert depicts actual landscapes around the Hantsport area. But here he relies on a geometric array of lines to suggest a vast sun-streaked plain cut by a road stretching to the horizon. Robert works so often with photo references that it is a revelation to see what he can do when he draws from his imagination. The idea originates with a sketchbook page linking a progression of images: a car ride, breakdown, abandoned car and stranded man searching for help. Also in this sketchbook is a reference to the Dylan/ Rick Danko song, “This Wheel’s on Fire,” with its refrain “This wheel’s on fire/ rolling down the road./ Best notify my next of kin/ This wheel shall explode.” It’s possible Robert thought of the sun as the wheel with its rays exploding across the landscape. While the sun could signal a coming apocalypse, it’s more likely the sun is a helpful beacon lighting the way for this distressed man. Robert first began working with sun motifs in art college on a series of images called “mirage.” This depiction of a bursting sun creates an Op Art effect. Robert often associates nature imagery with abstraction and with an accompanying sense of excited awareness.