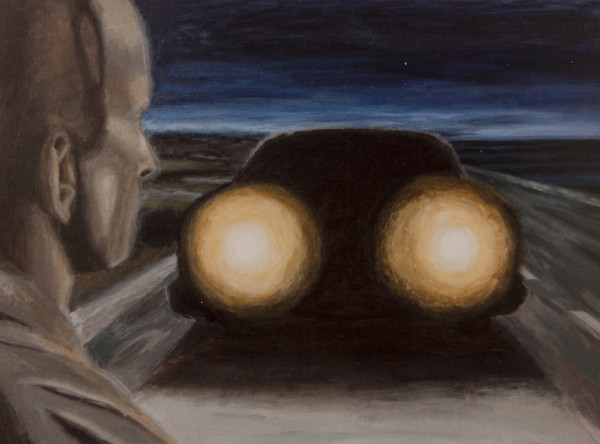 The image is reminiscent of Alex Colville’s haunting painting, Horse and Train, freezing the moment before an inevitable collision between on-rushing animal and speeding machine. Robert plays down this immanent sense of impact, with a more brooding sense of confrontation. Has this car come for this man? To take him somewhere, and where and why? Or is this a depiction of an accident or the possible rescue of a man stranded on the highway at night?

In Robert’s earlier paintings of cars, the vehicles are always shown at night. In his “Accident” series, he shows both daytime and night time scenes. The daytime scenes show the aftermath of trouble. The nighttime scenes are more hallucinatory. Car headlights suggest a revelation or sudden sense of awakened possibilities.

At one time, Robert’s series about cars was titled, “This Wheel’s on Fire,” after the Bob Dylan and the Band song on their 1967 Basement Tapes album. The Dylan/ Rick Danko song mixes Biblical imagery with what seems to be an angry conversation with an ex-lover. Though one Internet commentator suggests it’s really a Job-like conversation with God. Robert’s use of Dylan’s title for this series (subsequently replaced with the title “Accident’) underscores his desire to connect cars with popular culture.