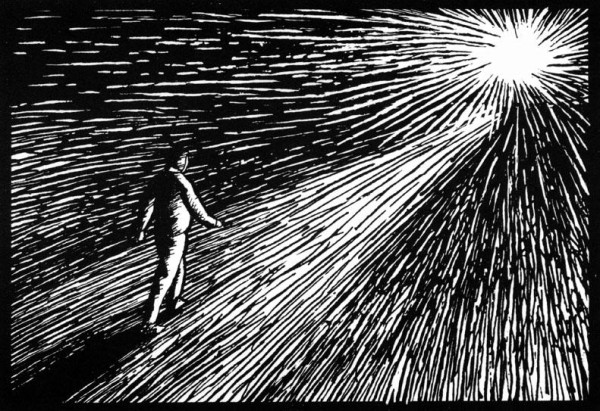 Robert’s images served many functions. This Ezekiel-like vision by way of Bob Dylan emerged out of Robert’s “Accident” series. The image next appeared on Robert’s home-made Christmas card for 1990, with a line from the Bible inside: “The light shines in the darkness and the darkness has not overcome it.” (John 1:5) After Robert’s death, his father used this image on the cover of a book describing his grief and attempts to overcome it, A New Relationship. Robert’s initial study of a man walking along a deserted road is one sketch in a page of drawings that appear to tell a story: after a romantic interlude, there’s a car crash and a man goes looking for help. Robert developed two versions of the image, one using a Op Art geometrical landscape and the other using a wild stream of marks signifying the dispersal of light and energy. The tiny drawing is open to interpretation. Is this a near-death experience or a search for other-worldly guidance? Or is it a statement that even in the hardest of circumstances, there is a way forward?