Studies for Into the Light and Cloud 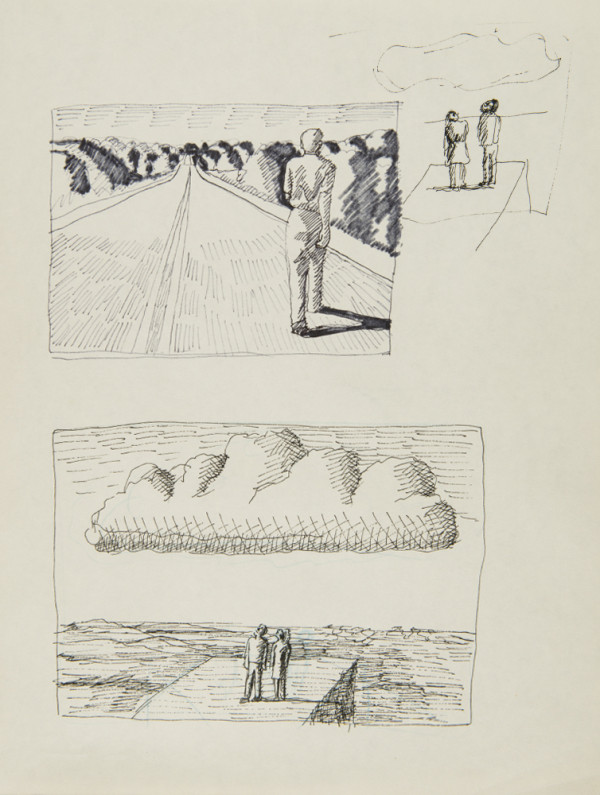 Robert’s sketchbooks reveal how he worked on several ideas at the same time. He often placed studies for different works side by side, as if considering how one picture extends, contrasts or complements another. This page, from the “Accident” series, is a good example. In a series ostensibly about cars, both images are conspicuously absent of cars. Instead Robert focuses on the metaphor of a road as life journey and the wharf as a troubling disruption of the journey.

In the top sketch, a man walks along a deserted country road, possibly looking for help after his car has broken down. In the bottom sketch, a couple notice a large cloud above their heads. One thinks of the saying, “to live under a cloud.” Both images suggest a degree of bad luck, showing somewhat vulnerable figures in natural settings, thrown there, as if by accident, out of the world of cars and cities, technology and convenience. In the top image, this “bad luck” is the start of an adventure. In the bottom image, the cloud is a curious sight: beautiful, coincidental, fleeting and threatening. As Robert developed his sketches, he made the pairing of these two images more explicit by adding a sun to the landscape with the walking man. The finished works serve as “oppositions,” sun and cloud, motion and waiting. Together, they raise the question: are our lives purposeful and self-directed or are they chance-driven and prone to accident and circumstance?

Studies for Into the Light and Cloud
Keywords: sketchbooks