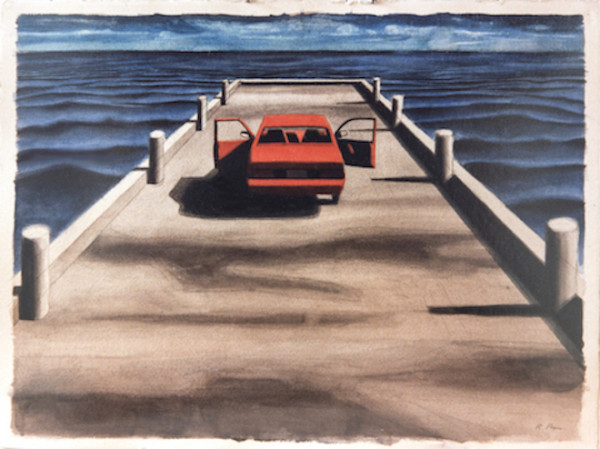 Robert’s interest in the mythology of pop culture often focused on cars. The Accident series takes, as a point of departure, the breakdown of cars and the subsequent unraveling of a sense of order and certainty. This reflected feelings Robert had at this time because of his own cancer experience. Here the car and wharf, representing an end of journey, is juxtaposed with the ocean with its limitless expanse to open many questions that are not easily answered. Was this a life journey and, if so, what was its destination and purpose? The wharf motif may have been influenced by Edvard Much’s anxious images of people on bridges over water. The sharp perspective effect is Robert’s invention, as is the strict symmetry. Car and wharf join the two principle motifs of this series, technology and nature, in an uneasy balance. The absence of people is rare in Robert’s work, though a device often found in Magic Realist painters like Tom Forrestall, Christopher Pratt and Andrew Wyeth. The abandoned car juxtaposed with wharf and ocean prefigure New Field, from the “Illness and Healing” series, an image in which a crutch is abandoned beside an endless field of corn. Dropping the material things of life in the face of more immaterial concerns. On a more technical note, for the “Accident” series, Robert switches from using acrylic watercolor on paper to using opaque acrylic paint on canvas. However, there are a few exceptions. This is one of them.