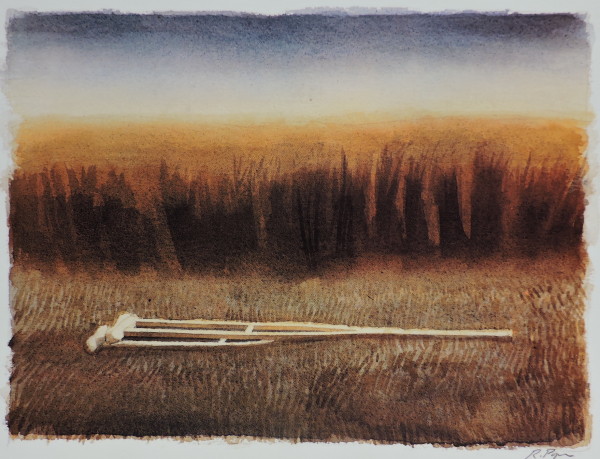 This image was inspired by the film, Field of Dreams, 1989, adopted from W.P. Kinsella’s Magic Realist novel Shoeless Joe, 1982. In this watercolour version, the crutch lies before a field of wheat. The acrylic on canvas version uses a field of corn in tribute to the Kevin Costner movie. In the film, the corn field serves as a portal to another world allowing the dead and living to intermingle in a space that is free of the wounds of the past.

The abandoned crutches are reminiscent of artefacts left by pilgrims seeking miraculous cures in churches such as Saint Anne de Beaupré in Québec. Corn and wheat fields are sources of food and reflect Robert’s interest in healing through healthy diet. In one image, Robert has combined three ideas: environment, food and health, with the suggestion that the harmony of these parts is essential to well being and wholeness.