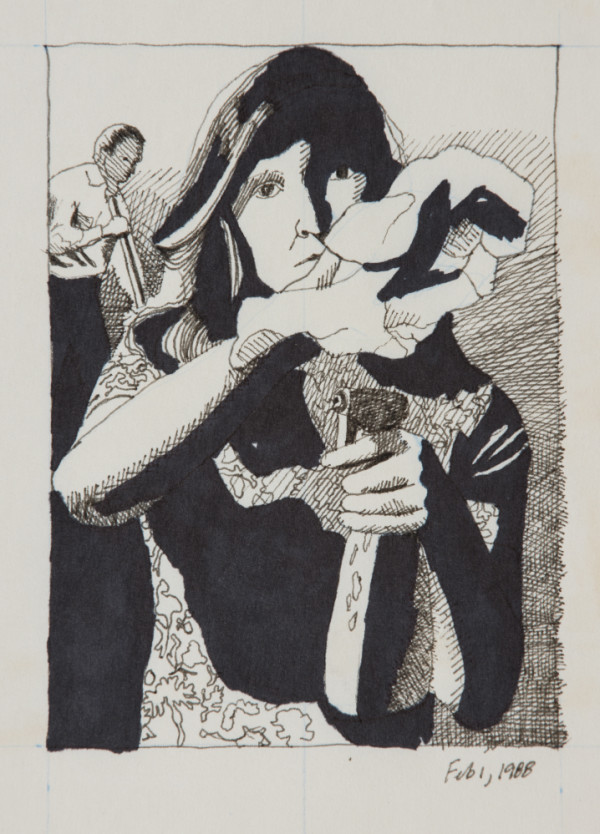 Like a mime artist working without props, the woman cleans an invisible surface–a pane of glass is suggested without actually showing one. (Without the window, it looks like the woman is about to squirt the viewer in the eye. A little revenge for peering in at her life perhaps?) Paintings are windows into another world. But just how reliable are these windows? Robert draws attention to this line that divides viewer and artwork.

The image is from Robert’s “Seal Upon Thine Heart” series and suggests the heroine’s self-delusion. In the story, By Grand Central Station I Sat down and Wept, on which Robert based his series, the young woman, Elizabeth, has an affair with a famous writer, who is married and has no intention of leaving his wife. The lovers meet in secret and have sex in hotels and in remote country locations. And yet Elizabeth dreams of setting up house and doing ordinary couple things, like cleaning windows together.

Robert may have been inspired by the Van Morrison song, “Cleaning Windows.” In his song, Van Morrison reminds us that happiness is a state of mind and that pleasure can be found in the willingness to engage in simple things. This becomes a major theme of Robert’s later cancer series. When you’re sick, or when something is denied you, as in the case of Elizabeth and her secret life, small routines take on added importance.