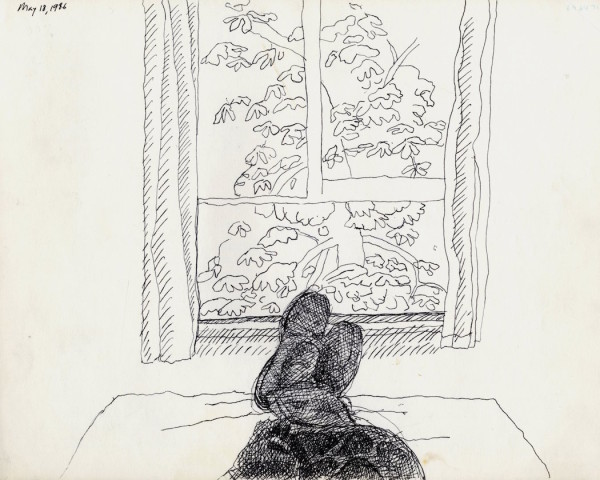 The drawings Robert produced in Saint Margaret’s Hospital in Toronto in 1986 are the first of his images to be truly autobiographical. He is no longer using alter-egos, telling stories that are parallel to his own, or disguised as allegories as he did in the “Seal Upon Thine Heart” series. Though Robert later writes in his book, Illness and Healing, that he was too ill at the time to lift a pencil, the evidence indicates that he made several drawings while in hospital, including the first studies of the patient’s headless torso and of the patient and window. Before Robert even knew he was going to do a series based on his cancer experience, this initial sketch of the artist’s feet projecting outward from the bed signals the patient’s point of view. The feet are dark and heavily crossed-hatched to contrast with the brightness of the tree bursting into leaf outside. The crossed feet suggest a relaxed pose. In the countless headless torso images that follow, the legs are not crossed, bare feet are shown and more of the legs appear so that it is clear the patient is wearing pyjamas and in a hospital.