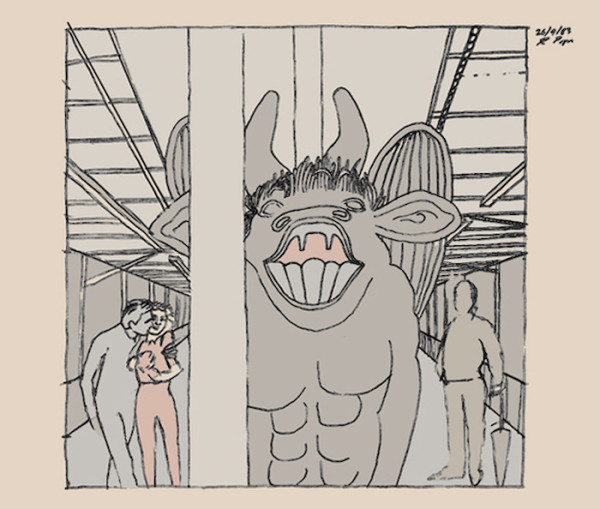 The incongruous gargoyle in a train station turns New York into Gotham City, a modern but edgy metropolis whose mixed signals and confusing signs channel energy in unexpected directions. The gargoyle may be based on a figure from the Trinity Building next to the Trinity Church in the Wall Street district. Fordham University hosts a site called “Midtown Gargoyles and Figurative Decoration,” describing the prevalence of gargoyles in New York, and mentions how these Gothic stone figures often turn up in movies set in New York, most famously in Ghostbusters.

The gargoyle in Robert’s drawing, a hybrid of different creatures with horns and wings, seems to shout out directly at the viewer, compelling attention, though the people in the background oddly take no notice. This is the first instance of Robert’s “talking animal” motif, where an animal serves as a kind of spirit or ghost giving voice to inexpressible emotions. Robert uses the vanishing perspective lines of the station’s architecture to draw attention from foreground to background and to bring his contrasting elements together.

Robert had a strong sense of New York as center of the art world and once said he dreamed of one day having an exhibition of his work in NY. This was realized in 1996, when his “Illness and Healing” series was displayed at the Mount Sinai Medical Centre.