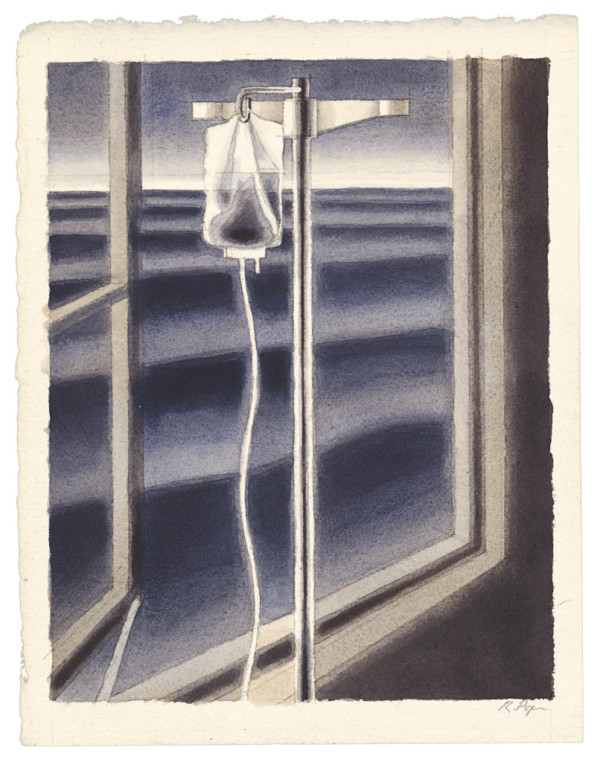 In a sketchbook,  Robert notes: “Blood is a simultaneous symbol of birth, life and death. Water operates the same way; a life-giving substance that one can drown in.” Robert often used parallels and contrasts in his work. Here he contrasts an apparatus of modern medicine (the I-V pole and solution) with nature; indoors (presumably a hospital) with outdoors; and the confinement of illness with the wide-open spaces that a healthy person can experience. The ocean may be a fantasy or daydream of the bed-ridden patient. The window, which serves as a medium connecting these different levels of reality, appears repeatedly in Robert’s “Illness & Healing” series.

As Robert depicted patients, he needed a way to distinguish them from non-patients, especially in images in which the two appear together. In art history, figures are often given “attributes,” symbolic props or costumes that help identity them. Examples of attributes in paintings of the past are: a man holding keys is Saint Peter, a woman with a peacock is Venus, a child with wings is Cupid. Robert gives patients different attributes: they wear pyjamas or robes in the middle of the day, they use crutches or wheelchairs, but by far the most important attribute that Robert gives his patients is the I-V pole and bag of solution. So much so that it becomes an example of a psychological condition that Carl Jung referred to as “participation mystique.” Jung used this term to describe the loss of personal ego as one moves toward a more communal or tribal sense of self. But the term is also used when a person identifies with an object, say a “famous blue raincoat” or an I-V pole. The attribute replaces the person as the patient experiences a gradual loss of identity, yet retains a need for connectivity and contact with others, as well as a sense of place or belonging.