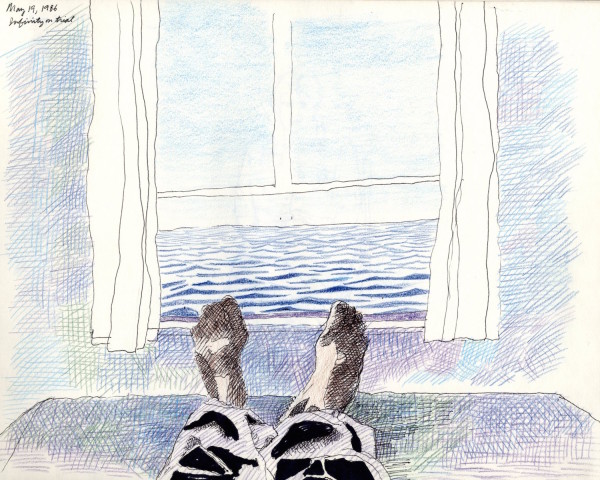 Robert draws his own feet on a hospital bed and a window in a bare room opening to a world outside that is inaccessible to him, yet a source of dream and hope. This drawing, made in a downtown Toronto hospital, pictures the the ocean of his home province. The patient is beginning to fantasize about escape. At the top of the drawing, Robert notes a possible title or an idea related to the image, “Infinity on trial.” The patient’s experience is a kind of trial. He dreams of infinity, of life beyond his own limited present. Infinity may also refer to the endless waiting, the interminable stretches of time between treatments. As Robert develops his cancer series, two alternate paths are followed: 1) the fantastical and symbolic, of which this image is an example, and 2) the documentary, which traces the more procedural aspects of the patient’s experience. Remarkably, the headless torso motif is used frequently in both ways.