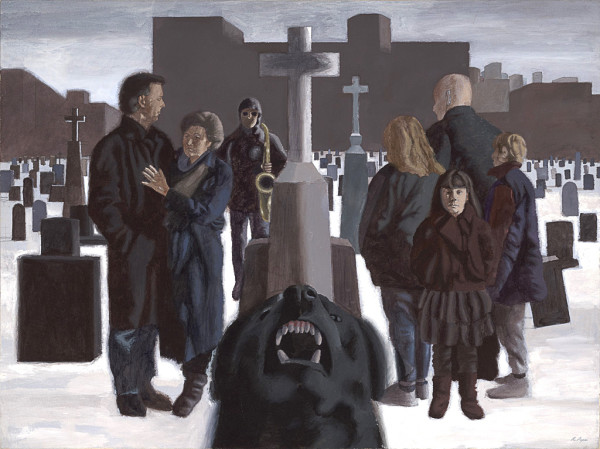 The funeral takes place in winter. Mourners wear dark heavy clothing, which looks even darker against the snow. The gray silhouette of the Victoria General Hospital is visible in the background. Each mourner reacts in a different way. The man on the left is withdrawn; his wife puts her hand on his chest to comfort him, while the rest of the family stand together in a separate group. A musician waits for a cue before playing his instrument, uncertain if music is appropriate at this time or not. A girl in a pleated skirt looks out, seeing what none of the others do. This is the barking dog, who may be a ghost or a supernatural agent. The dog calls out, expressing raw emotions that the family, constrained by the occasion, are unable to articulate.

Robert’s series is called “Illness & Healing,” but he clearly was aware how many cancer cases end in death. On a sketchbook page, he notes Elizabeth Kugler-Ross’ five stages of dying or grief (denial, anger, bargaining, depression and acceptance). Robert himself went through these stages as he worked on his project. The word used in the title of Robert’s series,  “healing,” may not necessarily mean a cure, but a reconciliation with one’s state for both patient and family.