Study for Underground Parking with Notes 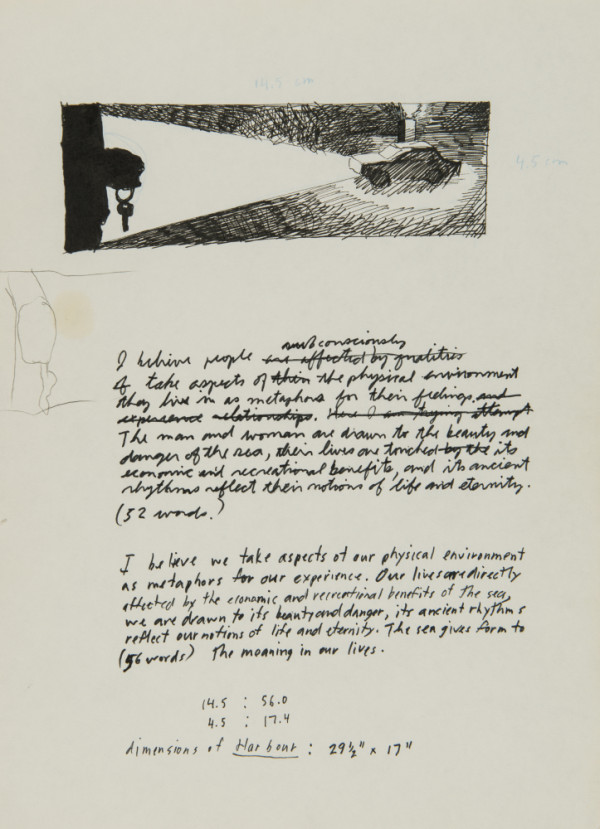 Under a study for Underground Parking, Robert has written an artist statement for another painting, Harbour. He writes this statement twice, once in a messy version, and then in a neatly printed version. The statement reads: “I believe we take aspects of our physical environment as metaphors for our experience. Our lives are directly affected by the economic and recreational benefits of the sea. We are drawn to its beauty and danger. Its ancient rhythms reflect our notions of life and eternity. The sea gives form to the meaning in our lives.”

The statement is addressed to a curator or to a jury for a grant. Robert asks himself what kind of artist he is. A pop artist, a social realist, an allegorical artist or an artist interested in telling stories with the kind of themes one encounters in films, literature and mythology? The answer is: he’s interested in all of these things. In his statement, he declares that he wants his pictures to combine environments with people, and comment on economy and entertainment, beauty and danger. The illustrated study shows a human figure, at the very edge of the frame, holding a key. This is the challenge Robert has set for himself: bringing people and places together in a symbolically charged manner that has meaning for others, as well as himself.