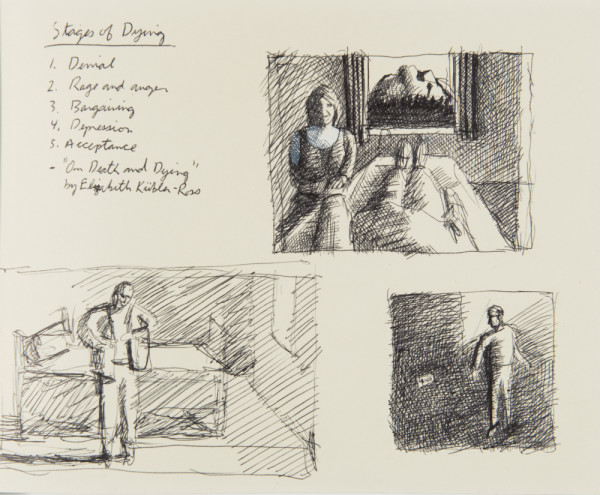 Robert used his sketchbooks to generate ideas for paintings. His ideas came from different sources. Here he makes notes from Elizabeth Kubler-Ross’s book, On Death and Dying. Kubler-Ross’s notion that patients and their families pass through 5 stages of dying or grief (denial, anger, bargaining, depression and acceptance) is now widely accepted by the medical and hospice communities. Robert tried to express what patients were feeling, and because he worked with series of pictures, he was intrigued by the notion that patients–himself included–revised their ideas about themselves and their condition.

The thumbnail sketches on this page do not exactly illustrate these notes. The study at top is for the painting Mountain. The sketches at the bottom of the page show a man getting dressed, as if about to leave the hospital, and then pausing to glance at a clock. This clock, without the patient, appears in the painting, Window. In three small sketches, Robert shows both companionship and solitude; he contrasts a hospital interior with a dream-like exterior; and he draws attention to time, how it might drag or become a precious quantity to the patient.