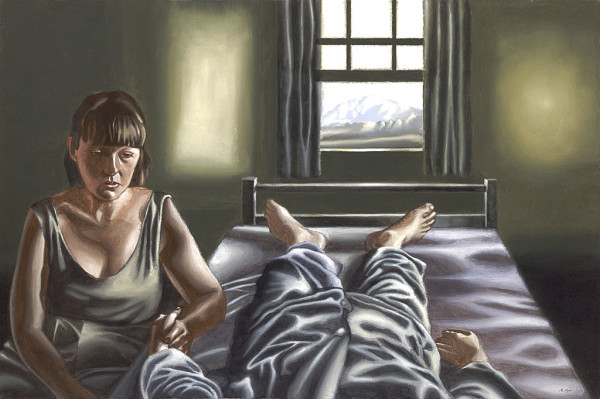 Robert was often influenced by the lyrics to popular songs. The Elvis song, “Lord, You Gave Me a Mountain,” written by Marty Robbins (1968) is a gospel-flavoured dialogue with God, a tale of pain and bewilderment, a hard life surviving one blow after another until at last the singer cries out: “You know Lord I’ve been in a prison/ For something that I never done/ It’s been one hill after another/ I’ve climbed them all one by one/ But this time, Lord you gave me a mountain/ A mountain you know I may never climb/ It isn’t just a hill any longer/ You gave me a mountain this time.” Though the window is in the background of the image, the patient’s feet point like an arrow to it and to the mountain beyond. The window projects what the patient is feeling—the mountain as symbol of insurmountable obstacle. In earlier studies, Robert drew cancerous tumors as mountainous landscapes that dwarf the overwhelmed patient. This treatment is more restrained. The patient as headless torso signals the viewer that this is a self-portrait. The presence of Heather MacKinnon as a sympathetic friend, adds a tender note to a scene that is otherwise quite sober and sad.