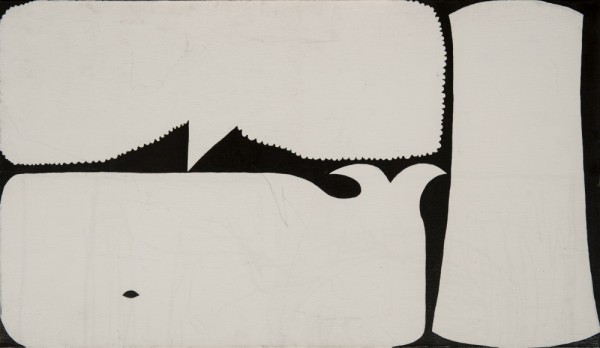 Robert loved the novel Moby Dick, especially the chapter “The Whiteness of the Whale” in which Melville argues that white is the both the colour of good and the colour of evil. The novel represents an epic chase spanning the globe. It is a story full of action, suspense and madness pushed to the brink of apocalypse. Yet it is also a story with many reflective and philosophical moments. The whale is a powerful, peaceful creature that when provoked turns on his tormentor with disastrous consequences. Nuclear power can be similarly disastrous. This was brought home to the world with the accident at the Three Mile Island power station in Pennsylvania where a partial nuclear meltdown occurred on March 28, 1979. Robert further likens the expelled air from the whale’s blowhole with a deadly mushroom cloud.

The painting appeared in the “Oppositions” show and Robert drew upon a number of contrasts: black and white, nature and technology, horizontal and vertical, convex and concave, war and peace. It is Robert’s first painting based on a work of literature, though he does not illustrate any scene from the novel so much as borrow its mythic character of Moby Dick and insert him in a setting with more contemporary elements. This strategy of dream-like displacement, mixing myth and everyday elements, especially elements that represent some facet of technology, would be repeated at many points throughout Robert’s career. Perhaps the strongest example of this occurs in the late work, Aesculapius, a work which combines a mythic snake with a modern patient and I-V pole.