Studies for Puzzle with notes 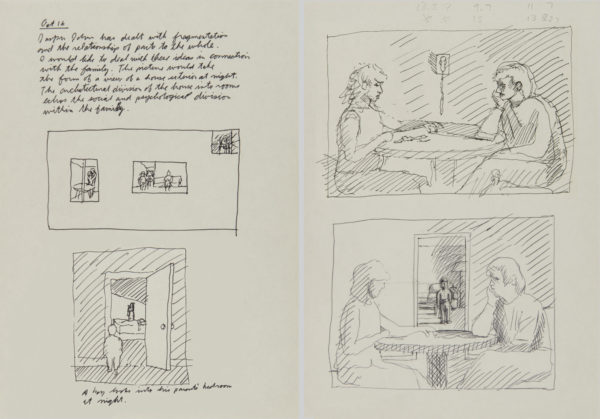 On the top left hand page, Robert comments on American Pop artist Jasper Johns. Johns is famous for depicting American flags, maps and fragments of other images within large mixed-media paintings. Robert is impressed at the way Johns creates pictures within pictures and attempts a similar strategy tracking a family through doorways and distant rooms. Robert writes: “The architectural division of the house into rooms echoes the social and psychological division within the family.”

Robert’s first impulse is to show rooms as seen from outside the house. He quickly abandons this idea. At left bottom, he shows a child looking into his parents’ bedroom at night. The child may want to be comforted or he may observe a scene of intimacy between adults that he is unable to comprehend, what Freud referred to as “the primal scene.”

On the right hand page, Robert shows the adults in the foreground and the child looking in from the background. The man and woman are no longer in a bedroom, but are now sitting at a table. The top image shows a phone on a wall between the couple. The bottom image replaces the phone with the child. An object used for communication is replaced with a person whose need to be included in the group is not entirely satisfied.

Studies for Puzzle with notes