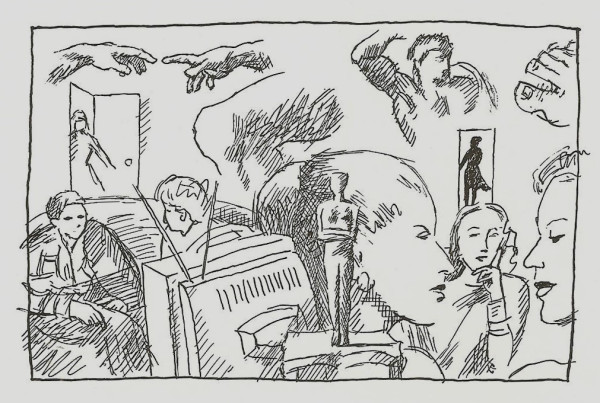 This small cartoon illustrates T.S. Eliot’s poem, “The Love Song of J. Alfred Prufrock.” Robert builds upon the poem’s references to art and the Bible, adding in a television and Hollywood Oscar statuette: the invasion of pop culture into high art. Robert has chosen to highlight the refrain, “In the room the women come and go/ Talking of Michelangelo.” Robert surrounds the clothed women with naked male body parts. Here “talking of Michelangelo” could be a euphemism for talking about sex. The coming and going of the women, illustrated by a woman entering a door beneath Michelangelo’s reaching hands from the Creation of Adam and a woman exiting a door beneath Michelangelo’s depiction of Christ presiding over the Last Judgment, add the sense of life and death, creation and exile. Further references to art history include quotations from Velasquez’s complex study of royalty and their attendants, Las Meninas, and to Picasso’s Portrait of Gertrude Stein. Stein, like Eliot, was a modernist poet who mixed with artists and hosted salons. Stein watching television is a particularly amusing anachronism.

This pastiche suggests a collage or multi-voiced conversation, tinged with a Baroque flavour. In his essay, “Baroque and the Marvelous Real,” (1975) novelist Alejo Carpentier describes the Baroque not as a period style but as a creative force that emerges in different times and places. In the 20th century, a Baroque impulse re-emerges most forcefully in the guise of Magical Realism. Carpentier argues the Baroque is “a constant of the human spirit that is characterized by a horror of the vacuum, the naked surface, the harmony of linear geometry, a style where the central axis … is surrounded by what one might call proliferating nuclei … motifs that contain their own expansive energy.”